Twenty years ago (and before that) most of us remember young people working service jobs such as fast food or operating cash registers.  Today, these jobs are increasingly being taken by working age people as opposed to school aged people.  Young people (age 16-24) are growing up more dependent on their parents than ever before.  Video games (the average young person spends about 6 hours per day in front of a screen) has a made “just hanging out at home” much more entertaining for young people than ever before.  They have also made things like cars, clothes and going out money less necessary…thus jobs to them are less necessary.

Recent data like the below chart from Pew Research highlight the declining trend over the past twenty years.  Today, only about 1/3 of young people have summer jobs, as compared to over 50% (a figure that held through for 50 years from 1950-2000). There are many causes of this.  However, one of the main causes is modern parenting which often emphasizes the need to please your children more than challenge them.  Many parents often have a low confidence level in their children’s ability to either do the job, show up for the job or keep the job.  They are also often over-protective and feel insecure letting go of their children and letting them loose into a world they perceive as too dangerous. 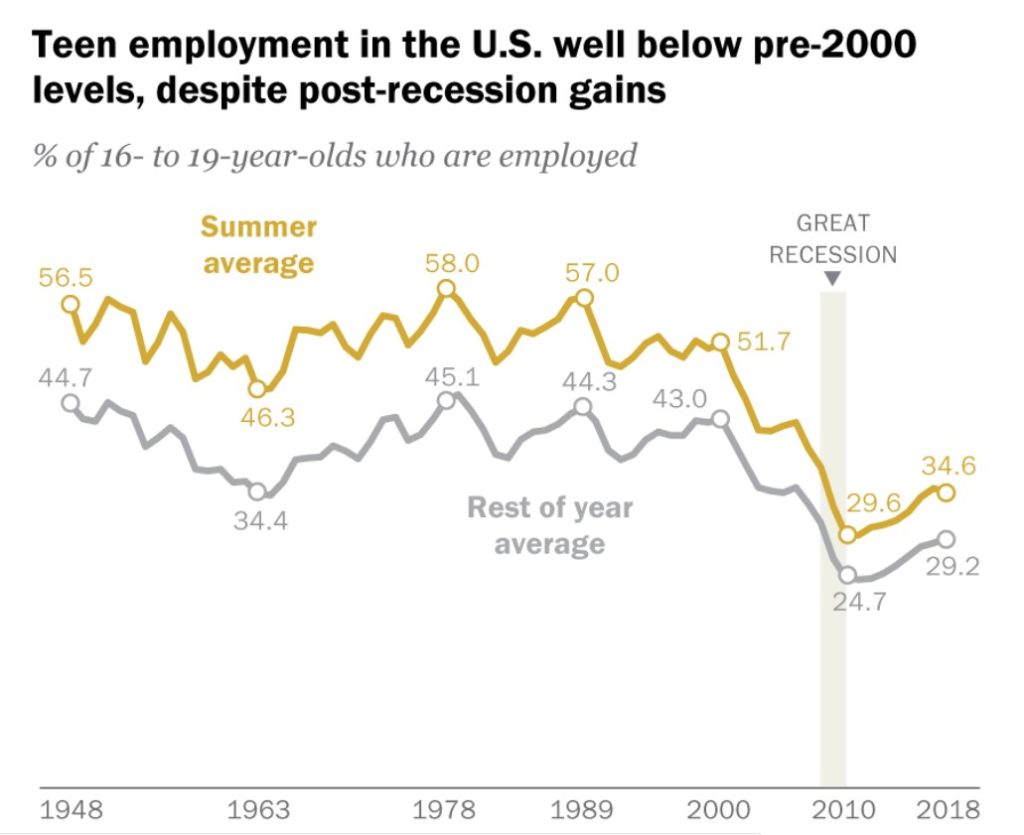 Another modern parenting axiom is that it’s a child’s job to play.  These declining summer job rates are not just about working paying jobs, the rates at which children at asked to contribute and work in the home are similar with only 28% of kids having chores to do at home (according to the Wall Street Journal).

Some modern parents feel that their kids are overstressed with academic requirements for collage and extracurricular activities (which may collages also require). However, the actual data simply does not support that with the average teen only spending 5 hours per week on organized extracurricular activities… and 40% of teens spend no time at all, according to Robert Pondiscio of the Fordham Institute.  Further, data from collages show that the modern student spends 12 hours per week studying (a 50% decline from their peers 50 years ago).

Of course, this way of parenting was not always the case in western cultures.  Describing his classic Greek education, Henri Marrou summarized well the ancient west’s perspective on parenting prior to Rousseau and the Victorian era: “[For the Ancient Greeks] the only point of childhood is that it leads to manhood, and the proper object of education is therefore not any slobbering child or awkward adolescent or even an up-and-coming young man, but Man, and Man alone; and the only point of education is to teach the child to transcend himself.”

While this seems harsh and “unfun” so is having adults in the world unprepared for adulthood.  To avoid this, perhaps we should begin raising our kids in reality…the reality we adults experience every day. This way we can pass along the lessons we learn to our children so they can prosper more and live happier than ourselves.